Raccoons - Signs Of Their Presence

Raccoons are fairly large animals. They range in size and weight from 12 - 36 pounds and their bodies can range from 26 - 38 inches long, including an on average 10-inch tail. Raccoons can be found in great numbers in both urban and suburban environments. In urban areas, for example, raccoons can reach densities of 100 or more per square mile. They are highly adaptable and will eat whatever is available, such as fish, birds, insects, worms, crops, acorns, fruit, seeds pet food and garbage in garbage cans/dumpsters. It's little wonder that more home owners are having encounters with them.

Raccoons are not territorial; they make homes in a number of areas covering a distance of about one mile in diameter. If there is a good feeding area though, they will fight to establish dominance. Some places they make their home are up in trees, tree cavities hollow logs, rock crevices, sewers, abandoned autos and burrows. Often they make their way to residential properties such as chimneys, attics, crawlspaces, porches, sheds, and garages. So how can you tell if its raccoons in or around your home? 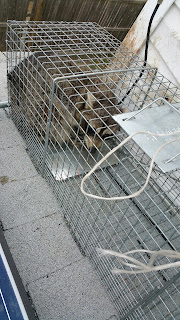 
Here are a few things to look for to determine if you have raccoons in and around your property:

If you experience any of these signs, then you have raccoons. They may appear to be cute and friendly, but remember they are wild animals and can be very aggressive. They are the primary carriers of rabies and roundworms. The feces can harbor the eggs of Baylisascaris procyonis, a dangerous species of roundworms.

If you have any encounters with raccoons, or suspect you have them anywhere in your home or on your property, call EM Pest Control immediately at 516-455-6742. We safely and humanely remove them from your property. At EM Pest Control, we don't kill the animals we capture, instead we move them five (5) miles from the captured site and release them, safe and sound. 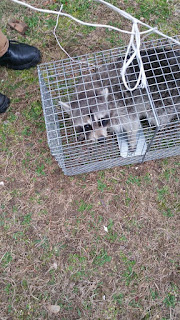 For more information on wildlife or any other pests visit our website www.empestcontrol.com

If you're buying a home and need a home inspection to determine the condition of the house and possible wildlife issues visit www.closerlookpi.com

Posted by EM Pest Control at 12:22 PM No comments:

We Get Rid of What Bugs You

At EM Pest Control, we are experts at getting rid of what bugs you at prices you can afford! We provide thorough inspections, quality treatment and follow-up to solve your pest problems and bring you the best results possible.