Because subterranean termites have a rather high moisture requirement, they need an environment of high relative humidity. The moisture in the soil and the air spaces between the soil particles usually provides the termite colony the atmosphere they need to thrive. Areas where high humidity are commonly found are unventilated basements and crawlspaces.  If sustained over long periods of time however, other sources of moisture can serve a colony of termites needs such as roof or gutter leaks, and defective plumbing.

Often it is very difficult for subterranean termites to maintain humidity near or at the saturation point in their feeding galleries and shelter tubes. When they build their shelter tubes on masonry and wood, these materials will absorb moisture, thus causing problems within the tubes. In an effort to reduce the loss of moisture to the environment termites line their tunnels with secretions that hardens and forms a moisture-resistant layer.
Another problem presents itself in the form of distance. Termites are often unable to feed on wall studs more than a few feet from the floor because they would be to far from a humidity source. Floor joist too represents an increased linear distance from the moisture source. So to provide more moisture to the joist, termites construct hanging earthen lined shelter tubes downward from the joist as shown in the picture below. 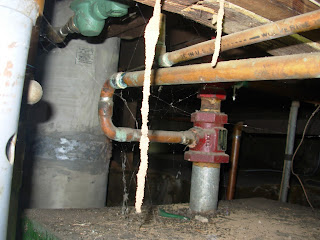 Poor ventilation in basements and crawlspaces often provide an atmosphere of high relative humidity. It's under these conditions that the joist will absorb moisture and become more susceptible to damage. In this basement the humidity level was well over 70%, enough for a major infestation. Severe damage was found in the support beams and floor joist. 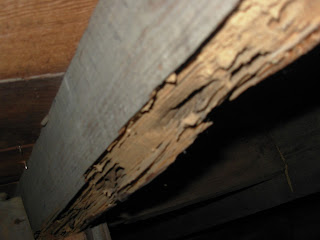 Remember, even though subterranean termites are associated with wet or moist soil, it's not always necessary that soil contact is maintained. If moisture and temperature is suitable colonies can survive indefinitely isolated from the soil.  So it's important, particularly in basements and crawlspaces that humidity levels are low and walls and floors are kept dry.
Labels: humidity infestation moisture shelter tubes subterranean termites
Location: New York 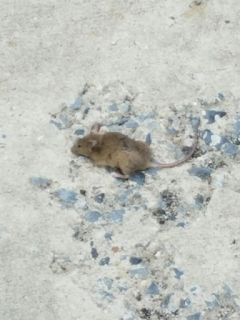 How To Prevent Mice In Residential Homes Carpenter Bees And The Damage They Cause